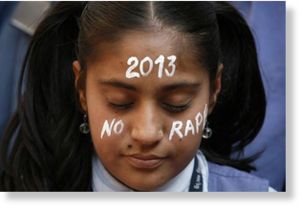 There have been an increasing number of reports about rape in the news recently.

I don’t know how many out there who have been paying close attention to these reports, but I have. The most recent ones reported via Signs of the Times (Sott.net) have involved gang rapes and child rapes that occurred and continue to occur in places like India, Pakistan and of course, here in the United States.

Date-rape in Ohio: Tale of rampant corruption, cronyism and cover-up

There are many more reports, of course. This is just a small smattering of recent articles published on Sott.net. In a quick search of the Sott.net archives, I found these alarming numbers:

And that’s just a cursory search of the archives. I suspect I’d find more reports if I continued to plug in keywords.

Rape appears to be ‘trending’ all over the world and it seems like this crime gets its 15 minutes of public attention and then the collective attention is drawn elsewhere.

I am particularly distressed to see reports in which so-called ‘experts’ try to paint pedophilia as something ‘normal’.

It seems to me that one only requires a conscience to figure out that having sex with children and with infants is WRONG on all levels, no matter where you live.

Today, we live in a world in which a lot of people try to contort the issues and muddy the waters of our thinking and we also live in a world in which we’re programmed to disconnect and become desensitized to images of violence, aggression, hatred, torture, and abuse of all kinds – including rape. Our children are also exposed to these things on a limitless scale, thanks to technology, Hollywood and the mainstream media. It’s a wonder that anyone can tell the difference between right and wrong anymore. We’ve got a lot of purported ‘experts’ out theredoing their damndest to erase that line in the sand.

I also realize that we live in a world in where our global society has been conditioned to blame the victim of crime rather than the perpetrator. We can probably thank the major religions for that one.

We see this on a grand scale, for example, when reading mainstream news reports about Israeli aggression and occupation, where Palestinians are typically depicted as aggressors and terrorists when in fact, Palestinians are notably and consistently the victims of aggression and a slew of other heinous crimes instigated and perpetrated by Zionist
psychopaths in Palestine.

Back to rape and pedophilia, I find it quite alarming that there are individuals out there who actually want the public to believe the bullshit that having sex with children, if done in a “gentle, willing, consensual way”, is not harmful and holds no harmful outcomes for the
child.

Are they serious, or what? How can anyone really measure the level of ‘harm’ done to any person, child or adult, who has been raped? Are we to believe it’s now ‘normal’ to have sex with an infant, a toddler, a 2 year old – or with anyone against their will? Is it okay if we
manipulatively ‘talk’ them into it and then claim it was “consensual”?

Is this how far we are degenerating as a species?

Are there any among you out there who see something wrong with this?

This particular story really set me off:

This is a mainstream news publication (The Guardian) that ran with this article.

Pathetic and obvious, to me.

My thoughts on this run along the line of: if we now accept and allow that it is ‘okay’ to ‘persuade’ or talk some unsuspecting child into engaging in sexual activity that they truly are not psychologically or emotionally equipped to deal with and understand, if we are to say it’s
‘okay’ to use children for adult sexual gratification now, essentially like they’re ‘food’ to be consumed, we’re just screwed as a species.

Sorry for the pun.

Children appear to be the MOST WANTED prey of psychopaths these days, and now we’ve got ‘experts’ to tell us, “Hey, sex with kids isn’t so bad, not if we use our inside voices and gentle touches.”

To hell with that noise. These are our children we’re talking about here. The youngest, smallest, most defenseless among us. Are we really going to allow the mainstream media perverts and some mentally twisted psychological ‘gurus’ out there to brushstroke over this reprehensible shit? Are we as a human race, no matter where we live, now going to
betray the most defenseless among us and sacrifice them to the perverted machinations of sexually deviant psychopaths?

In my mind, no matter how they want to paint pedophilia OR child rape OR gang rape or rape overall, it all boils down to an ATTACK on the victim.

It’s not just a physical violence perpetrated here, or a theft of innocence. I see rape even more as a soul demolition in progress. I liken it to a murder.

Is this really where we’re going to go?

Here are some (not all inclusive, I’m sure) rape statistics:

I also suggest putting keywords into the Sott.net search engine and take a look at what you’ll find there. It ain’t pretty, folks.

As you can see from just these two links above, rape is not merely problematic in places like India or Pakistan. Rape is happening everywhere in the world. Not just to women and girls, but also to young boys, as evidenced with the Penn State Sandusky pedophile scandal, and also to, inconceivably, toddlers and infants. It has also been going on under our noses for decades as evidenced by the Jimmy Savile child abuse scandal (that reaches up to the top levels of the overt British government) and this.

What kind of deranged, evil sicko looks at an 8 month old, a 2 year old, a mentally retarded child, at ANY child and acts upon some pathological sexual fantasy and wants to rape?

What kind of demented people do you think want us all to internalize this as NORMAL and OKAY and ACCEPTABLE human behavior?

It’s not human behavior to me. Rape is an act of violence, whether it’s done using a soft voice and a gentle touch or whether it results in a physical death of the victim.

Rape casts a long shadow. I know this from my own past experience, which I’ve never really written about because I didn’t want to ‘go back there’ in my head.

It’s been 24 years since it happened to me, by a man I knew.

And I can tell you, once you’ve been raped, you are never quite the same person again, ever – if you physically survive. I think the majority of rape victims live through the ordeal and go on and try to rebuild their lives, to mend as best they can, and to heal, or try to. Many do not,
also evidenced from recent news reports of gang-rape victim fatalities in India, as one example.

Rape, more than a loss of innocence, although it is surely that too, is a violation of the essence of another human being.

It is the tattering and shredding of a human spirit and the demolition of a soul.

And these rapists are not ‘normal’ people.

Let’s call them what they are: psychopaths.

We can either allow the pathologicals in power positions draw the line in the sand between right and wrong or we can draw our own line.

Isn’t it time the good people of this world finally admit we need to protect one another and most of all, we must, at any and all cost, protect the children?

There are dangerous psychopaths among us and I think there are MANY of them.

Either we protect one another or we become food.

I think it’s really as simple as that.

“Somewhere old heroes shuffle safely down the street
Where you can speak out loud
About your doubts and fears
And what’s more no-one ever disappears
You never hear their standard issue kicking in your door.
You can relax on both sides of the tracks
And maniacs don’t blow holes in bandsmen by remote control
And everyone has recourse to the law
And no-one kills the children anymore.
And no one kills the children anymore. “

~ Excerpted from The Gunner’s Dream, written by Roger Waters, performed by Pink Floyd.