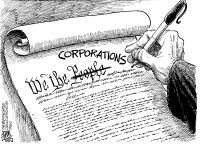 What stands out about the U.S. Supreme Court today isn’t its conservatism as much as its pro-business ideology, says new legal research.

In a paper published by the Minnesota Law Review, three legal experts concluded that the court led by Chief Justice John G. Roberts Jr. is friendlier towards companies than any court since World War II.

After reviewing the court cases, researchers ranked 35 justices who served on the court during the span in question. The ranking revealed that five of the current court’s members made the top nine most likely to vote in favor of business interests since the mid-1940s. Samuel Alito placed first, Roberts second, Clarence Thomas fifth, Anthony Kennedy sixth and Antonin Scalia ninth. Justice Elena Kagan was not included in the study because she had not yet been involved in a statistically significant number of business-related decisions.

During the eight years of the Roberts court, justices have opened the way for corporations to spend freely on elections, protected businesses from class-action litigation and human rights lawsuits, and steered disputes towards arbitration.

According to Erwin Chemerinsky, the dean of the law school at the University of California, Irvine, “The Roberts court is the most pro-business court since the mid-1930s.”