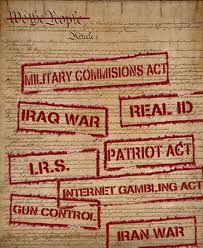 It used to be that foreign threats were advertised as the main reason to send our young men off to war to defend our country. Amazing though it seems, we used to believe those stories. Many of our fathers and grandfathers died defending that principle.

Now, all that has changed. The threat is no longer some faraway enemy. The main enemy to peace in the world and security at home has become our own government.

Actions speak louder than words. The words our government speaks do not match the actions it takes.

It purchases uncountable rounds of hollow point ammunition and fancy new tanks for local police departments at the same time it clamors about the need to take all guns away from the American people.

It conducts a program to rain down poison aluminum nanoparticles that sicken and kill both land and people, but refuses to admit such a program exists.

It approves genetically modified food to be consumed by the public, when medical experts not paid to lie know these foods are making people sick.

It allows — in fact, encourages — our police to kill innocent people with no repercussions, and lets guilty criminals slide if the slice they give to the puppeteers who control them is sufficient to make them look the other way.

Its own intelligence agencies distribute drugs to gangs in order to arrest those who use them to put people in prison to use as a workforce so that they can pay wages to inmates lower than they pay workers in China.

It creates new diseases in government laboratories and secretly dispenses them while also commissioning cures made by pharmaceutical companies that charge a thousand times more than what it costs to make them, and also do not work.

It stages foreign wars that are of zero benefit to the American people and easy money for the foreigners who have taken over the running of the country.

It allows these foreigners to steal billions at a time in order to give bonuses to the people who are doing the stealing.

It blows up skyscrapers in the middle of our biggest city and then blames it on people who have neither the inclination nor the ability to have done it.

It encourages unrestrained immigration with lucrative incentives to foreigners to water down the voting pool, and leaves its own citizens to lose their homes because it has shipped all the good jobs overseas.

It protects food and medicine manufacturers from malpractice lawsuits and demands people buy insurance for healthcare that will deliberately make them sick.

It allows its own officials to break the law and sets up innocent people with false testimony to put them in prison.

It urges us to vote for the candidate of our choice, but restricts those candidates to corrupt yes-men they choose, and won’t tell us about the precise procedures of how they count the votes.

It tells the media exactly what to report, and what they may not report — and the media robots eagerly oblige.

It endorses movies that depict innocent ethnic groups as vicious terrorists and praises its own vicious killers as noble heroes protecting our freedoms.

It sends billions to foreign governments and nothing to America’s decaying cities.

It overturns the rights of voters in all the states by insisting that their votes don’t matter because they violate arbitrary presidential Executive Orders that no American has ever voted on.

It lets a private company — the Federal Reserve — print all the money, because it makes all politicians rich, and all ordinary people poor.

It furloughs those protecting our borders and furnishes guns and ammunition to the foreign criminals delivering drugs and mayhem across those unguarded borders.

It tells you the unemployment rate is going down and the stock market is going up, but nobody has a job and the crap they are forced to eat because they have no money is mostly poisoned.

It says they may kill whomever they want to, but that the people may not fight back.

It promotes those who say they are willing to shoot at their fellow Americans, but denies veterans who have served in the military the right to own guns because they are mentally unstable from serving in wars in which they were ordered to rape children before they murdered them.

It poisons children at birth with vaccinations they don’t need, and steals children from their parents who object to the practice.

It controls the weather with high tech devices and sends storms that destroy neighborhoods, and then prevents help from reaching the displaced victims who are starving and freezing.

It sends people to college who can’t even read, but if they say the right thing enough times, they will soon hold high political office.

So who will protect us from own government, as it busily murders the whole world?

Will it be you, or are you one of them?

Those are the only two choices.