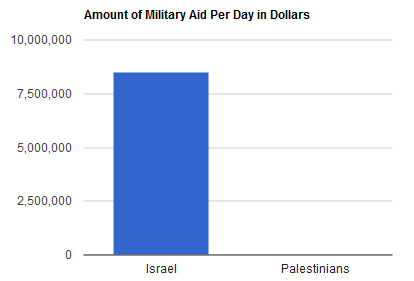 “Since the October War in 1973, Washington has provided Israel with a level of support dwarfing the amounts provided to any other state. It has been the largest annual recipient of direct U.S. economic and military assistance since 1976 and the largest total recipient since World War ll. Total direct U.S. aid to Israel amounts to well over $140 billion in 2003 dollars. Israel receives about $3 billion in direct foreign assistance each year, which is roughly one-fifth of America’s entire foreign aid budget. In per capita terms, the United States gives each Israeli a direct subsidy worth about $500 per year. This largesse is especially striking when one realizes that Israel is now a wealthy industrial state with a per capita income roughly equal to South Korea or Spain.”

* The source for US military aid to Israel during Fiscal Year 2012 is the Congressional Research Service’s “U.S. Foreign Aid to Israel,” written by Jeremy M. Sharp, Specialist in Middle Eastern Affairs, updated March 12, 2012. According to this report, the Obama Administration requested $3.1 billion in Foreign Military Financing (FMF) for Israel for the fiscal year 2013.

Over the last 20 years, the U.S. has been slowly phasing out economic aid to Israel and gradually replacing it with increased military aid. Beginning in 2007, the U.S. has increased military aid by $150 million each year. Beginning 2012, we will be sending Israel $3.1 billion a year (or an average of $8.5 million a day) and will continue to provide military aid at that level through 2018. U.S. tax dollars are subsidizing one of the most powerful foreign militaries. According to the CRS report, “[current U.S. military aid] grants to Israel represent 18.2% of the overall Israeli defense budget.”

Contrary to ordinary U.S. policy, Israel has been and continues to be allowed to use approximately 25% of this military aid to purchase equipment from Israeli manufacturers. According to CRS, “no other recipient of U.S. military assistance has been granted this benefit.” Thanks in part to this indirect U.S. subsidy, Israel’s arms industry has become one of the strongest in the world. “Between 2001 an 2008, it was the 7th largest arms supplier to the world with sales worth a total of 9.9 billion.”

In addition, the United States contributes funds for a joint U.S.-Israeli Missile Defense Program designed to thwart short-range missiles and rockets fired by non-state actors (such as Hamas and Hezbollah) as well as mid- and longer-range ballistic missiles (this refers to Iran and/or Syria’s asenals). The U.S. spent $106.1 million on this program in 2012 and plans to spend $99.8 million in 2013.

By all accounts the United States has given more money to Israel than to any other country. The Congressional Research Service’s conservative estimate of total cumulative US aid to Israel (not adjusted for inflation) from 1949 through 2013 is $115 billion.

According to McArthur, “[T]he indirect or consequential costs to the American taxpayer as a result of Washington’s blind support for Israel exceed by many times the amount of direct U.S. aid to Israel. Some of these ‘indirect or consequential’ costs would include the costs to U.S. manufacturers of the Arab boycott, the costs to U.S. companies and consumers of the Arab oil embargo and consequent soaring oil prices as a result of U.S. support for Israel in the 1973 war, and the costs of U.S. unilateral economic sanctions on Iran, Iraq, Libya and Syria. (For a discussion of these larger costs, see ‘The Costs to American Taxpayers of the Israeli-Palestinian Conflict: $3 Trillion,’ by the late Thomas R. Stauffer, June 2003 Washington Report, p. 20.)”

The U.S. Agency for International Development (USAID) has provided the Palestinian people with some indirect economic assistance through funds distributed to U.S.-based NGOs operating in the West Bank and Gaza. According to the CRS report, “Funds are allocated in this program for projects in sectors such as humanitarian assistance, economic development, democratic reform, improving water access and other infrastructure, health care, education, and vocational training.” The program is subject to a vetting process and to yearly audits…

In addition, some funding has occasionally been provided directly to the Fatah-led Palestinian Authority (PA) in an attempt to strengthen it against competing political parties (particularly Hamas) and for use in policing the Palestinian people. Such funds are usually only authorized once Congress has received proof that they will be used for “non-lethal assistance.”

The United States also provides funding to the United Nations Relief and Works Agency for Palestine Refugees in the Near East (UNRWA), “which provides food, shelter, medical care, and education for many of the original refugees from the 1947-1949 Arab-Israeli war and their families—now comprising approximately 4.8 million Palestinians in Jordan, Syria, Lebanon, the West Bank, and Gaza.” (Learn more about Palestinian refugees.)

$400.4 million have been appropriated for economic aid to the Palestinians and $100 million for support of PA police training, etc. for FY2010. The U.S. also provided just over $61.5 million (as of February 13, 2009) in emergency humanitarian aid through USAID, UNRWA, and the International Committee of the Red Cross following Israel’s assault on Gaza.