You Won’t Believe What They’ve Done … 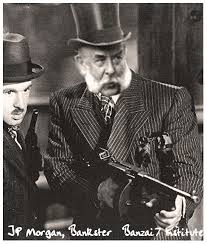 Here are just some of the improprieties by big banks:

Financing illegal arms deals, and funding the manufacture of cluster bombs (and see this and this) and other arms which are banned in most of the world

Launching a coup against the President of the United States

Laundering money for drug cartels. See this, this, this and this (indeed, drug dealers kept the banking system afloat during the depths of the 2008 financial crisis)

Engaging in mafia-style big-rigging fraud against local governments. See this, this and this

Charging “storage fees” to store gold bullion … without even buying or storing any gold . And raiding allocated gold accounts

Engaging in insider trading of the most important financial information

Engaging in unlawful “Wash Trades” to manipulate asset prices. See this and this

Otherwise manipulating markets. And see this

Cooking their books (and see this)

Violently cracking down on peaceful protesters

The executives of the big banks invariably pretend that the hanky-panky was only committed by a couple of low-level rogue employees. But studies show that most of the fraud is committed by management.

Indeed, one of the world’s top fraud experts – professor of law and economics, and former senior S&L regulator Bill Black – says that most financial fraud is “control fraud”, where the people who own the banks are the ones who implement systemic fraud. See this, this and this.

Even the bank with the reputation as being the “best managed bank” in the U.S., JP Morgan, has engaged in massive fraud. For example, the Senate’s Permanent Subcommittee on Investigations released a report today quoting an examiner at the Office of Comptroller of the Currency – JPMorgan’s regulator – saying he felt the bank had “lied to” and “deceived” the agency over the question of whether the bank had mismarked its books to hide the extent of losses. And Joshua Rosner – noted bond analyst, and Managing Director at independent research consultancy Graham Fisher & Co – notes that JP Morgan had many similar anti money laundering laws violations as HSBC, failed to segregate accounts a la MF Global, and paid almost 12% of its 2009-12 net income on regulatory and legal settlements.

But at least the big banks do good things for society, like loaning money to Main Street, right?

The big banks have slashed lending since they were bailed out by taxpayers … while smaller banks have increased lending. See this, this and this

The big banks are looting, killing the economy … and waging war on the people of the world

And our democracy and republican form of government as well

We can almost understand why Thomas Jefferson warned:

And I sincerely believe, with you, that banking establishments are more dangerous than standing armies ….

Banks have done more injury to religion, morality, tranquility, prosperity, and even wealth of the nation than they have done or ever will do good.

The issue which has swept down the centuries and which will have to be fought sooner or later is the people versus the banks.

No wonder a stunning list of prominent economists, financial experts and bankers say we need to break up the big banks.