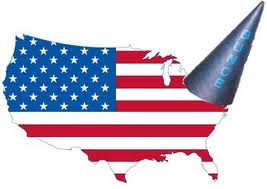 As I’ve repeatedly noted, FBI agents and CIA intelligence officials, constitutional law expert professor Jonathan Turley, Time Magazine, and the Washington Post have all said that U.S. government officials “were trying to create an atmosphere of fear in which the American people would give them more power”.

Indeed, the former Secretary of Homeland Security – Tom Ridge – admits that he was pressured to raise terror alerts to help Bush win reelection.

In the real world, as the National Safety Council notes:

– You are 17,600 times more likely to die from heart disease than from a terrorist attack

– You are 12,571 times more likely to die from cancer than from a terrorist attack

– You are 11,000 times more likely to die in an airplane accident than from a terrorist plot involving an airplane

(Moreover, the chair of the 9/11 Commission said that the attack was preventable).

Indeed, much of our debt is due to the wars in Iraq, Afghanistan, Libya and elsewhere.

And yet the top American military and intelligence officials say that debt is the main threat to our national security. See this and this.

So by over-reacting, we are causing real, substantial and lasting damage to our country. (It is admitted by Bush, Cheney and others that the Iraq war was actually about oil, and the Afghanistan war was planned before 9/11, but this essay takes at face value the government’s claims that the wars have been for self-defense.)

Already, security measures—pervasive ID checkpoints, metal detectors, and phalanxes of security guards—increasingly clot the pathways of our public lives. It’s easy to overreact when an atrocity takes place—to heed those who promise safety if only we will give the authorities the “tools” they want by surrendering to them some of our liberty. As President Franklin Roosevelt in his first inaugural speech said, “The only thing we have to fear is fear itself— nameless, unreasoning, unjustified terror which paralyzes needed efforts to convert retreat into advance.” However, with risks this low there is no reason for us not to continue to live our lives as though terrorism doesn’t matter—because it doesn’t really matter. We ultimately vanquish terrorism when we refuse to be terrorized.

In April, Reason pointed out:

“Many people will focus, much of the time, on the emotionally perceived severity of the outcome, rather than on its likelihood.” They add, “With respect to risks of injury or harm, vivid images and concrete pictures of disaster can ‘crowd out’ the cognitive activity required to conclude and consider the fact that the probability of disaster is really small.” Activating the emotional centers in the amygdala shuts down the operation of the executive functions of the pre-frontal cortex. Taking advantage of this flaw in reasoning, the researchers observe, “In this light, it should not be surprising that our public figures and our cause advocates often describe tragic outcomes. Rarely do we hear them quote probabilities.” In other words, politicians and activists deploy sob stories to scare the public into demanding regulations on activities they dislike.

“If we look across dozens of cases, we can observe a pattern in which salient but extremely low probability risks are sometimes met with excessive responses,”

Satirist H.L. Mencken memorably summarized this democratic dynamic: “The whole aim of practical politics is to keep the populace alarmed (and hence clamorous to be led to safety) by menacing it with an endless series of hobgoblins, all of them imaginary.”

Indeed, politicians have known for thousands of years that playing the fear card gives them more power and makes their subjects more compliant:

“This and no other is the root from which a tyrant springs; when he first appears he is a protector.” – Plato

“If Tyranny and Oppression come to this land, it will be in the guise of fighting a foreign enemy.” – U.S. President James Madison

“Terrorism is the best political weapon for nothing drives people harder than a fear of sudden death”. – Adolph Hitler

“Why of course the people don’t want war … But after all it is the leaders of the country who determine the policy, and it is always a simple matter to drag the people along, whether it is a democracy, or a fascist dictatorship, or a parliament, or a communist dictatorship … Voice or no voice, the people can always be brought to the bidding of the leaders. That is easy. All you have to do is to tell them they are being attacked, and denounce the pacifists for lack of patriotism and exposing the country to danger. It works the same in any country.” – Hermann Goering, Nazi leader.

“The easiest way to gain control of a population is to carry out acts of terror. [The public] will clamor for such laws if their personal security is threatened”.
– Josef Stalin

Unfortunately, while politicians regularly terrify people with gruesome reminders of 9/11 and exaggerated stories about future terrorism risk, they ignore the high-probability risks – like the destruction to the economy through unchecked fraud and corruption, nuclear plant and deep sea oil rig operators which cut every corner in the book, and the loss of our liberties and the rule of law.