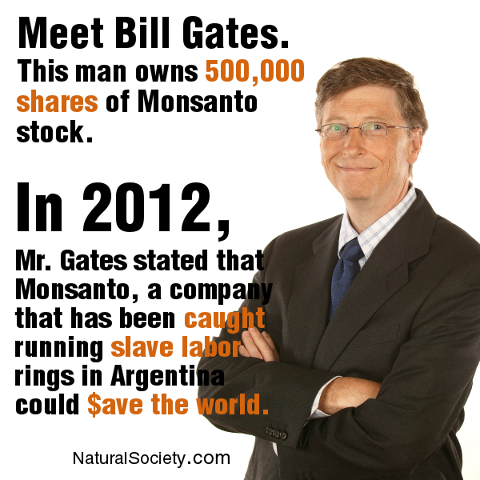 Bill Gates is primarily known as the multi-billionaire who created Microsoft, the company behind the most popular computer operating system known as Windows. With this massive wealth, he has retired from leading Microsoft and now instead focuses his money and time on furthering genetically modified technology, geoengineering, experimental vaccinations, and preaching about how Monsanto is the answer to world hunger.

It should come as no surprise, then, that Gates owns 500,000 shares worth 23 million US dollars (or more) of Monsanto stock. The very same company that has been caught running slave rings in Argentina in which workers were forced to work 14+ hours a day while withholding payment, has used their massive finances to fund organizations that literally fake FDA quotes to support GMOs, and of course peddling through GMOs that have been linked to numerous health concerns.

This is not even taking into account the farmer suicides that occur around every 30 minutes due to Monsanto’s failing GMO crop yield bankrupting small-time farmers in India’s notorious ‘suicide belt‘.

And if that’s not enough, The Bill and Melinda Gates Foundation has even teamed up with Cargill to pump GMO soy into the third world. Cargill, of course, is the the 133 billion dollar corporation that also has been found in direct violation of human rights laws. Cargill was sued by the International Labor Rights Fund for trafficking children from Mali and forcing them to work on cocoa bean plantations for around 12 to 14 hours each day without pay, food, or sleep. The company even continues to purchase cotton from Uzbekistan, where it is well known that child slave labor is used in the cultivation.

Bill Gates himself even filmed commercials for Monsanto’s GMOs, propping them up as the ‘solution’ to world hunger despite even the United Nations admitting that GMOs cannot fight hunger as effectively as traditional farming. Headed by an entity known as the International Assessment of Agricultural Knowledge, Science and Technology for Development (IAASTD), a team of 900 scientists and researchers studied the issue of world hunger. The results of the major study were very simple: 900 scientists agreed that GMO crops were not the answer to the world hunger, and revealed this in 2008 — long before Bill Gates began claiming that GMOs were the answer while ignoring this readily available information.

Even the Union of Concerned Scientists examined the true yield of GMO crops, only to find that the GM crops do not produce increased yields over the long run — despite their excessive cost and extreme danger to health and environment. The lack of scientific support behind the GMO crops was so startling to the Union that they documented all the details in a 2009 report entitled ”Failure to Yield.”

Watchdog groups have criticized Gates’ support of these corporations after finding out about his massive funding. One such group, a part of the Community Alliance for Global Justice, stated:

So why is Bill Gates, a man who is propped up by the media as an angel of philanthropy, pumping millions (if not billions) into these operations? And why is he claiming that GMOs can fight world hunger when we know this is not true due to decreased yields and other problems?

I Asked Bill Gates Why

In a unique opportunity to ask Bill Gates himself why he has purchased 500,000 shares of Monsanto behind the scenes (expelled into the news thanks to tax information) and teamed up with Cargill to expand GMOs worldwide, myself and several others asked him ourselves.

Yesterday Gates opened himself up to questions from online users via the social sharing site Reddit, in which he posted an open interview of sorts known as an ‘Ask me Anything’ post. This is essentially an invitation for questions that the subject will answer via text. While I had a large number of questions for Gates, such as if he actually eats GMOs himself, I simply asked him:

Unsurprisingly, the comment received a large degree of feedback. Users asked Gates to please respond to the question, and several others posed similar variations to Gates that all went unanswered (as to be expected). Some quotes from users in response to my question included:

User Lawfairy replied: “I wish he’d answered this one — to me, this is one of the most curious things about Mr. Gates, whom I otherwise respect as one of the foremost humanists of our generation… Mr. Gates’ relationship with Monsanto is, in my mind, simultaneously the most morally troubling thing about Mr. Gates”

Another user posted (with links intact): “Would you be willing to take some time to give us some insight with your investments in Monsanto? Despite having the headlines of “ending world hunger”, this company has done some despicable things in the past 100 years and I don’t believe they have the public’s best interest in mind. Having a single company or entity trying to “control”, “manipulate” or “own” the world’s food supply, in my opinion, is not the way to end world hunger.”

Another user answered with: “Because he is supporting the Bilderberg group!”

None of these received a response nor did the many others I could not include in this article. The answer, it seems, is to bring this topic to the mainstream. The very same mainstream that seems to think Bill Gates is some sort of philanthropic super star that can do no evil. I am opposed to all wrongdoing at every level, and I find it absolutely disturbing that someone funding the GMO agenda and slave-labor-linked companies has been met with applause.