Due To “Supposvid-19” We Advise Going Directly to;

Click Here For The Irrefutable Truth About What’s Really Going On In “These Times”! 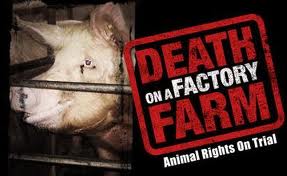 Remember our exposé on the factory farms, and the legislation designed to keep the public in the dark about them? They’re back! It’s not just that these bills trample the First Amendment. It’s that these bills are designed to keep the filthy, profoundly unsanitary conditions at factory farms—CAFOs, or Confined Animal Feeding Operations—from being exposed to the public. CAFOs are the antithesis of safe and nutritious food. If governments, both federal and state, were truly serious about food safety, they would address the miserable CAFO conditions.

CAFOs are responsible for foodborne illnesses such as salmonella and listeria; are notorious for their use of antibiotics for nontherapeutic uses, and for exacerbating the “superbug” problem in which organisms become increasingly resistant to antibiotics; and ruin rural economies. In addition, there is the inhumane treatment of the animals themselves.

Ag-Gag laws prevent consumers from being informed, and therefore consumers ability to fully choose what they eat.

The current spate of bills are not novel: ten states introduced similar legislation in 2011–12, and bills were passed in Iowa, Missouri, and Utah. The rest were defeated by grassroots activists like you. These bills are introduced by legislators who have strong industry financial backing. Industry has the tenacity—and the deep pockets—necessary to keep trying to push these bills through again and again, year after year, if they don’t pass the first time.

Last year’s bill in Iowa is a good case in point: it’s a study in rampant conflicts of interest. Monsanto pushed Iowa’s anti-trespassing/Ag-Gag bill because the company has more facilities in Iowa than any other state in the country, and because “crop operations” are also covered by the bills—so Monsanto seed houses, pesticide manufacturing plants, and research facilities in Iowa will be “protected” from hidden cameras or whistleblowers infiltrating their plants.

It’s really all about the economics of CAFOs:

There are approximately 15,000 CAFOs in the US, which raise 50% of all animals used for our food.

Sponsors of the 2012 Iowa bill, Senators Joe Seng (D) and Annette Sweeney (R), received contributions from special interests including the Iowa Corn Growers Association (who contributed 8% of Seng’s campaign funding and gave a similar amount to Sweeney), the Iowa Farm Bureau Association, Monsanto, and the Iowa Agribusiness Association. Of course we have no idea what lobbying, if any, went on behind closed doors, but the money trail—and the support for legislation that directly benefits these special interests—speak for themselves.

These Ag-Gag laws are inspired by a model bill called the “Animal and Ecological Animal Terrorism Act” from the American Legislative Exchange Council (ALEC). ALEC has both powerful corporate members and legislators, making the conflict of interest pretty seamless. ALEC’s corporate members are a Who’s Who of the Big Food supply chain, from farmers to retailers: Monsanto, Kraft, Walmart, Walgreens, etc.

The intent of the ALEC-modeled bills is to introduce them in many states, sometimes word-for-word. It becomes a systematized process. As the New York Times reported last year, an ALEC membership brochure “boasted that ALEC lawmakers typically introduced more than 1,000 bills based on model legislation each year and passed about 17 percent of them.” When ALEC runs with a bill, it has the support necessary to go much further by being introduced in many states simultaneously. It’s a sneaky way of legitimizing an idea that benefits only powerful and wealthy companies, not the general public.

Numerous state legislators are members of ALEC; last year, of the sixty legislators who voted in favor of Ag-Gag bills, 23% of them were members of ALEC, as are sponsors of three of the new Ag-Gag bills: Arizona state senator Jeremy Hutchinson and Wyoming state representative Sue Wallis. In 2010 Wallis was the subject of a conflict-of-interest complaint for trying to block legislation that would send stray horses to slaughter when at the same time she was planning to build a horse slaughter plant of her own. Both Wallis and her cosponsor on the Wyoming bill, Ogden Driskill, are both members of Wyoming Stock Growers Association. Driskill accepted contributions from livestock industry as well as Exxon Mobil.

Here’s a run-down of all seven state bills:

Action Alert! CAFOs don’t need further protection, and individuals who bravely expose CAFO conditions should not be penalized. If you’re a resident in one of the five states where these new bills have been offered, please contact your legislators and tell them to honor free speech and oppose these bills.  Please send your message today!