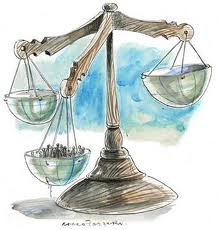 The mainstream media is not telling you this, but the truth is that most Americans are steadily getting poorer.  The middle class is being absolutely eviscerated, and poverty is soaring to unprecedented heights.  The fact that 90 percent of the population is constantly sliding downhill.

All of this has happened under both Democrats and Republicans.  Meanwhile, wealth and power continue to become even more heavily concentrated in the hands of big government and big corporations.  Our founding fathers warned that we should not allow such large concentrations of wealth and power, because they tend to funnel the rewards of society into the hands of a select few.

#4 In the United States today, the wealthiest one percent of all Americans have a greater net worth than the bottom 90 percent combined.

#5 According to the Economic Policy Institute, the wealthiest one percent of all American households have 288 times the amount of wealth that the average middle class American family does on average.

#6 According to Forbes, the 400 wealthiest Americans have more wealth than the bottom 150 million Americans combined.

#7 The six heirs of Wal-Mart founder Sam Walton have as much wealth as the bottom one-third of all Americans combined.

#8 According to the U.S. Census Bureau, the middle class is taking home a smaller share of the overall income pie than has ever been recorded before.

#11 According to a report recently issued by the Pew Research Center, Americans over the age of 65 have 47 times as much wealth as Americans under the age of 35 on average.

#12 U.S. families that have a head of household that is under the age of 30 have a poverty rate of 37 percent.

#13 Back in 2007, about 28 percent of all working families were considered to be among “the working poor”.  Today, that number is up to 32 percent even though our politicians tell us that the economy is supposedly recovering.

#14 At this point, one out of every four American workers has a job that pays $10 an hour or less.

#15 Today, the United States actually has a higher percentage of workers doing low wage work than any other major industrialized nation does.

#17 As I mentioned yesterday, the homeownership rate in America is now at its lowest level in nearly 18 years.

#18 The United States now ranks 93rd in the world in income inequality.

#19 Approximately one out of every five households in the United States is now on food stamps.

#20 The number of Americans on food stamps has grown from 17 million in the year 2000 to more than 47 million today.

#21 According to the U.S. Census Bureau, more than 146 million Americans are either “poor” or “low income”.

#22 At this point, the poorest 50 percent of all Americans collectively own just 2.5% of all the wealth in the United States.

Even if your income just stays the same, you are still getting poorer because inflation is a tax that is constantly chipping away at the value of every single dollar that you own.  The cost of everything that we buy on a regular basis (food, gas, health insurance, etc.) is constantly going up, and if your income is not keeping pace that means that you are getting poorer.

So if most Americans are getting poorer, then why aren’t our politicians doing something to fix it?

Well, the sad truth of the matter is that the big corporations fund the campaigns of our corrupt politicians.  They know that the candidate that raises the most money almost always wins, and so it provides an incentive for our politicians to be very good to those that have the money.